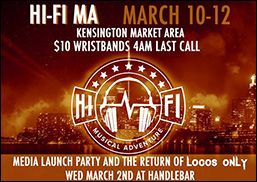 TORONTO, ON (CelebrityAccess) — Anthony Dell'Orso, a co-founder of the city's Hi-Fi Musical Adventure, posted about Kesha and her legal battle with her producer Dr. Luke. Dell'Orso reffered to Kesha as "talentless hack with a penchant for drama" on his Facebook page.


His remarks, according to Billboard, upset female artists scheduled to perform at the festival later on March 16 and now his fellow Hi-Fi Musical Adventure organizer, Amanda Langton, has scrapped the event, telling Billboard.com, "I've dismantled Hi-Fi – I feel it's for the best."
Dell'Orso has also issued a statement to the publication, apologizing for his comments which led to the axing of the event.

"I did a stupid thing posting what I did in the first place and the events that followed," he wrote. "Looking back, I should have just stepped away from it and let it lie, but sometimes emotions get the best of you.
"I apologize for my behavior and the fallout it caused. I’ll try to repair any relationships that may have been affected by this and trust me I’ve seen far better days."
After Kesha lost her battle to void her Sony Music recording contract,
"What Kesha is going through is horrible and the deal that she signed is a form of slavery," Dell'Orso added. "I never meant to make light of the situation having to do with the allegations surrounding her and Dr. Luke."


Dr. Luke tweeted “I didn’t rape Kesha and I have never had sex with her. Kesha and I were friends for many years and she was like my little sister.” And insists this is true and has never deviated from this.


Lastly, Amanda posted this on Facebook for festival goers “Hi everyone. Amanda here.


You've no doubt heard about the goings on surrounding the festival and yes, the festival as it was is done. Anthony has stepped away.


These bands will play, however. I've taken on the shows at Vinyl and Handlebar and they will happen as booked under my name. Supermarket will happen, as will Silver Dollar and Old Laurel.”