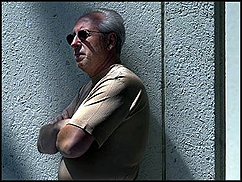 LOS ANGELES (CelebrityAccess MediaWire) — Anthony Pellicano, the former celebrity private detective who is currently finishing a 30-month sentence on federal firearm charges, is expected to be indicted again within a few weeks.

With a line up of Hollywood power brokers, lawyers, agents and executives, called before a grand jury or questioned by federal agents, the industry is bracing for the possibility that the damage will not end with the disgraced former detective, according to a report by the New York Times. It now appears that some present and former CAA execs as well as other Hollywood heavyweights may be facing charges.

The 61-year-old Pellicano, whose clients included celebrities defending their reputations and entertainment lawyers seeking to bolster their cases, went to jail in 2003 after pleading guilty to possession of unregistered firearms, grenades and explosives.

The FBI continued to chase much bigger prey after his conviction, including allegations that Pellicano had engaged in widespread illegal wiretapping on behalf of a number of lawyers and their clients, with the help of a rogue law enforcement officer and a telephone company worker.

Prosecutors are in the final stages of assembling what is expected to be a racketeering case against Pellicano, as the three-year grand jury investigation draws to its close. It is expected that Pellicano will be accused of wiretapping and witness-tampering.

As the new charges are brought against him, the continued pressure for him to break his silence and testify against some Hollywood heavyweights appears to be all but inevitable, according to the Times.

“They’re definitely going to indict him on wiretapping before he gets out,” Victor Sherman, on of Pellicano’s criminal lawyers told the paper. “November sounds right.”

Ovitz has previously told investigators that he never hired Pellicano to conduct wiretaps and, in fact, was unknowingly recorded by him, his lawyers told the Times.

The case against Pellicano originated in 2002 after Los Angeles Times reporter Anita Busch was threatened while pursuing a story about actor/blues musician Steven Seagal and his relationship with a mob figure. A tip from an informer led to the FBI to a convicted felon, who was recorded as saying he had been hired by Pellicano to stop Busch’s reporting.

That November, after Busch discovered that he phone had been tapped, investigators raided Pellicano’s office, seizing computer files with notes and transcripts of wiretaps. They also found a variety of weapons, and Pellicano first pleaded guilty in October 2003 to illegally possessing unregistered firearms. He was sentenced in January 2004. –by CelebrityAccess Staff Writers