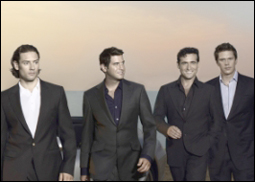 BEVERLY HILLS, CA (VIP-NEWS) — Operatic pop supergroup Il Divo has signed a global touring and merchandise agreement with Live Nation for its next tour, scheduled to begin in the U.K. in Feb. 2009.

The company will promote all of Il Divo's dates and will have exclusive rights to Il Divo's merchandise, tour sponsorships, fan club and VIP packages.

Il Divo is set to release its fifth album, "The Promise," on Syco/Columbia Nov. 10 outside the U.S., and Nov. 18 stateside.

The group will continue to record under Sony BMG; the tour will comprise about 90 dates in its first phase and up to 150 total over two years, according to manager Peter Rudge of Octagon.

Il Divo's third tour will begin in the U.K. in mid-February, then hit continental Europe, Canada and the U.S. The group will then arrive in the Far East, Australia and New Zealand, wrapping up its first leg in October.

Il Divo's next leg will take the foursome to South Africa and Latin America.

"They've hit all five continents already very quietly, so this is just a continuation of that strategy," Rudge tells Billboard.biz.

Simon Moran of SJM in the U.K., Udo Artists in Japan and Paul Dainty of Dainty Consolidated Entertainment in Australia will continue to promote Il Divo's tours in their respective markets, albeit via deals with Live Nation.

Agents David Zedeck from CAA and John Giddings from Solo represented Il Divo
in the deal.