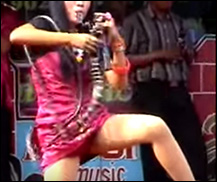 KARAWANG, Indonesia (CelebrityAccess) — Indonesian pop star Irma Bule died shortly after a performance after being bitten by a king cobra used as a stage prop.

According to Mashable, Bule was at a village in Karawang, West Java in Indonesia on April 3rd when she was bitten. Witnesses reported that she inadvertently stepped on its tail, during her performance, causing the venomous snake to strike her thigh.

A snake wrangler attempted to administer anti venom, but Bule refused treatment and continued to perform for another 45 minutes. After she started to display symptoms related to the venom, she was taken to a hospital, but died, the report said.

Bule was a well-respected Dangdut performer, a style of Indonesian folk-pop music. According to Reptiles Magazine, she frequently performed with live snakes on stage, including king cobras and reticulated pythons. She was 29 at the time of her death. – Staff Writers