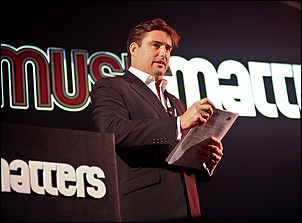 Branded’s Jasper Donat has been working with branded content in all forms since the ‘80s.

Donat got his start in advertising in 1987 in London at Chris Ingram Associates, now Mediaedge:CIA, after which he joined European broadcaster, Eurosport.

He moved to Asia in 1995 to work for News Corp-owned sports network, Star Sports, where he was responsible for the commercial development of the Heineken Open (tennis) in Singapore, Swatch Beach Volleyball in Bali, Volvo China Open (golf) in Beijing and the NEPC Masters Cricket in Sharjah.

In 2001 he co-founded Branded, a media & entertainment brand marketing agency focused on Asian markets, where he has partnered brands with a number of major touring artists and exhibits, including Walking With Dinosaurs, the Rolling Stones, Black Eyed Peas, Jamie Cullum, We Will Rock You, James Blunt, Chicago the Musical and even Barney the Dinosaur.

In 2006, Donat launched the Hong-Kong based Music Matters – the Asia Pacific Music Forum. Music Matters, which Donat oversees as president, is Asia’s only conference focused entirely on the music industry. The conference brings together industry professionals from across a spectrum, including majors, independents, promoters, digital retail, lawyers, financiers, mobile and media.

This year’s conference is set to take place this year from May 26th to May 28th at the Grand Hyatt in Hong Kong.

Where did you grow up?

How did you end up in Asia?

My old boss and mentor Robert Bland persuaded me that it would be a good idea to try Asia for a year or two. That was 15 years ago!

Branded content is any content (TV, film, music etc) that contains a brand name or visual whether paid for or not.

How much of an impact is technology having on the way consumers experience marketing content? Are there any major trends on the horizon?

We are rapidly becoming an on-demand society getting whatever content we want whenever and wherever we want it. Traditional programme scheduling is becoming a thing of the past.

How have Asian markets changed in the last ten years? Do you think they are opening up to western artists?

Asia has made a quantum leap in modernization in previous years; however it is a common mistake to believe that Asians want to be more western. That said, there is still a fabulous opportunity for western artists who are able to understand consumers in each local market. You also have to be here and build a relationship with a huge potential fanbase if you want to succeed. Sound familiar?

How much local awareness is there about western artists in China?

It depends on which city you visit. Beijing and Shanghai have had more exposure to western acts, however tier two cities such as Chengdu and Wuhan are providing more opportunities for bands to showcase and perform.

What differentiates brand marketing in Asian markets from their western counterparts?

The basic principles of “product, price, position, and placement” remain the same however the media landscape and trading practices tend to be hugely different.

What made you decide to launch Branded?

There was a gap in the market for a company to act as a conduit between entertainment content, media and brands so we filled it!

What do you think Branded can offer to its clients that your competitors can't?

We understand the relationship between media, brands and entertainment. We are completely independent and have been around for nearly ten years in a space that is still quite new in Asia. We have an international team that has been together for many years. We have a pedigree of delivering on promises for clients and our media and entertainment network in Asia, and beyond, is far reaching and full of open minded decision makers.

How did Music Matters come about?

Music Matters launched in 2006. Music as a passion was exploding thanks to the internet and mobile devices but there was no outlet for the business to come together and plot an exciting future! We have since become Asia’s true industry event, driven and designed by, with and for the music industry.

What challenges does staging a conference in Hong Kong present as opposed to a city like London or Las Vegas?

Hong Kong is situated at Asia’s coalface and is the Asian music industry hub (all the majors are based here). The conference is housed in the wonderful Grand Hyatt hotel however, Hong Kong is not renowned for having too many live music venues… but this is changing. We have just launched a new platform on the back of the conference called “music matters live” which is a free festival in Hong Kong’s Lan Kwai Fong district. 40 bands, from all over the world, in 4 or 5 venues over three nights –Should be a blast!

My day is dictated by two things; a four-year-old and email. The former wakes me up to play at six am the latter keeps me up past midnight. If anyone can show me a way to deal with the email deluge, I'll be their friend for life!

If I had to do it all over again, I wouldn't…

I think I have it (except for the Sundays of course.)

That creative and passionate music people are still allowed to run the business. Other industries have been taken over by finance-heads who can take the fun out of life…surely there should be a healthy balance!

Sponsorship is a fact of life in Asia, however many artists don’t like to “sing” for their supper. Although budgets in Asia are not yet at European or American levels they will be soon, and more so. Tons of artists are missing out on some amazing opportunities to develop their own brands through marketing partnerships. The current model needs to change.

What essential tools do you use in your business?