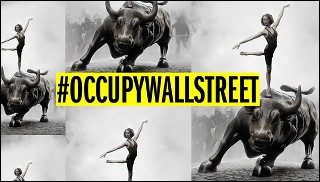 NEW YORK (Hypebot) — Occupy Wall Street (OWS), the Manhattan sector of a growing international protest movement-in-the-making, has already seen a few famous musicians drop by including Lupe Fiasco and Kanye West. It's also being used by some musicians to promote their music, including an artist called Penguin Prison that took a previously released song and repurposed it for OWS. But is it really a good idea to use social movements for music marketing?

High profile visitors to Manhattan's Zuccotti Park, where the New York contingent of the Occupy movement is based, have included Lupe Fiasco, who has been very supportive and even donated tents, and Talib Kweli, who performed and encouraged park occupiers to keep it going. These appearances fit both artists' identities as politically minded performers who stand with their fellow citizens rather than with representatives of political parties.

Kanye West also made a brief, well-publicized walkthrough with Russell Simmons, apparently keeping his gold chains on and saying little to nothing with, for the most part, a somewhat clueless and defensive facial expression. In a bizarre misreading, many in the media called this an endorsement of the movement on Kanye's part, not recognizing that it was simply another example of Russell Simmons playing consciousness educator with a clueless superstar.

All these guys are playing their expected roles and don't seem especially likely to be making money off their manuevers but what can you say about a musician who takes a previously released song about a personal relationship, claims it's related to OWS and uses that to publicize himself as he heads to Zuccotti Park to use the protest as a background for his music video? The claim was even made that this lightweight track by Penguin Prison, "Don't Fuck With My Money", is "already becoming the anthem for this movement!"

Music journalist and Occupy participant Justin Hampton blogged in response, "fuck Penguin Prison and fuck them using this as a means to market their hipster bubblegum."

Stars do what they do but the question of whether or not up and coming artists should align themselves with social movements while also marketing music is one well worth considering. I'm very interested in what Hypebot readers have to say about this, but here's my quick take:

1) If you have a history of creating political art and expressing your take on social issues then participating in emerging movements with high media visibility is simply part of that process. Truly political artists tend to be embraced by protestors and, even if they're not well known, provide inspiration for the difficult task of social change.

2) If you have no history of such involvement but you find yourself wanting to learn more about a movement that seems to be expressing something you believe, then becoming involved and even publicly endorsing a political perspective can be a positive move. It may inspire new work and it will let people know that you may have more depth than previously recognized. Of course, it may also polarize fans who have embraced you because they dig your sound without having to hear lyrics that conflict with their politics.

3) If you have no history of such involvement and think taking a stance would be a great way to build your profile and sell some music, then you should seriously reconsider what it means to attempt to manipulate the dreams and desires of human beings struggling to create change.

That said, if you're cool with manipulating people, go right ahead because it's most likely to make you look like a fool and deservedly so. I'd say that's what's happening with Penguin Prison and it's well deserved.

Bottom line, if you want to give your support to a social movement in which you believe, go for it. If you see it as an opportunity to get some cheap publicity, as a wise man once said, "you better check yo self before you wreck yo self."

Hypebot contributor Clyde Smith is a freelance writer and blogger.