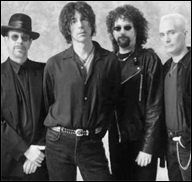 BOSTON, MA (CelebrityAccess MediaWire) — The J. Geils Band will be giving its fans another dose of their rock ‘n’ roll as they unite for a special limited tour. The band is hitting the road with original members Peter Wolf (lead vocals), Seth Justman (keyboards), Danny Klein (bass) and Magic Dick (harmonica) and will be joined by longtime associates Duke Levine (guitar) and Tom Arey (drums). See below for tour dates.


Once again, The J. Geils Band will be joined by the Uptown Horns and background vocalists, who appeared with the group on their historic "Freeze Frame Tour" in the early 1980s.


Peter Wolf, who recently released the solo album Midnight Souvenirs, says, “To rock it up once again with The J. Geils Band, gives us a chance to share a body of work that we created and enjoy performing.”


These Boston-based rockers are known for their special blend of blues, rock and R & B. They’ve toured with blues greats such as Muddy Waters, Howling Wolf and John Lee Hooker and headlined with the Allman Bros., Tom Petty and U2.


Signed to Atlantic Records in 1970, the band received immediate airplay with the singles "First I Look at the Purse," "Looking for a Love," "Give it to Me," "(Ain’t Nothin' But A) Houseparty" and "Musta Got Lost.” The group garnered further commercial success in the early 1980s with their EMI albums "Sanctuary", "Love Stinks" and "Freeze Frame", which included the smash hits “Freeze Frame” and "Centerfold" (#1 for six weeks on the Billboard Hot 100 chart).

*additional dates to be announced soon