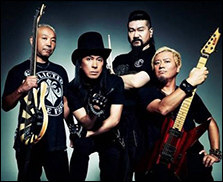 LOS ANGELES (CelebrityAccess) — Japanese rock band Loudness announced that they are canceling their planned tour of the U.S. after running into trouble with U.S. Immigrations and Customs Enforcement.

According to the Chicago Tribune, the band was slated to appear at Reggies Rock Club in Chicago on Wednesday but were blocked by customs officials after arriving in Los Angeles due to the lack of visas.

“Due to the new strict policies the U.S. government has placed on foreigners entering the country, Loudness was denied entry into the United States,” a rep from Reggies said in a post on their website.

Reggies' owner, Robby Glick told the Tribune that a PR Rep for the band told him that they were relying on 'exemption papers' that were acceptable for the band's previous visits to the U.S. but apparently not this time around.

"It's a little bit harder," Glick told the Tribune. "I don't know if it's a product of the administration or if Loudness was flying by the seat of their pants, but there is a difference since our new president came in."

After being refused entry, the band announced that their full seven-date tour would be canceled as well.

“The U.S. tour has been canceled,” vocalist Minoru Niihara wrote on his blog, per the Japan Times.

“My suitcase has also returned home. But I’ll leave it alone so I can go back on tour anytime. I feel very sorry for fans and others involved who were excited about the show. We’ll do our best to resume the tour,” guitarist Akira Takasaki said via Twitter.

The band's management Katana Music told the Times that they have previously had few troubles for bands without visas if they have invitation letters. However, as we've seen with earlier instances of bands running afoul of border controls this year, such letters typically don't apply to tours, if they apply at all. While there are exceptions to the visa requirements, and the interpretation of said exceptions can be confusing, international artists generally need valid visas to tour or perform in the U.S. – Staff Writers