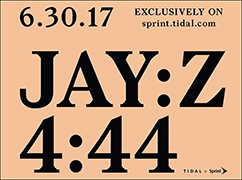 (Hypebot) – The music industry and streaming leader Spotify have agreed that exclusive releases should be a thing of the past, and Apple Music has said that they are moving away from them. But Jay Z and TIDAL took a big check from Sprint and early this morning announced the "first in a series" of exclusive releases: Jay Z's new album.

JAY-Z's new album, "4:44", will be the first in a series of exclusives offered to 45 million Sprint customers and TIDAL members. Sprint customers are also being offered six months of TIDAL at no cost. "4.44" os the followup to 2013's hugely successful "Magna Carta Holy Grail."

To be released on June 30th at 12 AM, the 4:44 exclusive is part of a deal last year that saw Sprint invest $200 million for a 33% share in Jay Z's TIDAL music streaming service.

New and existing Sprint customers can get a free six-month trial of TIDAL HiFi at TIDAL.com or by visiting a Sprint store. New Boost Mobile customers can subscribe during the activation process in-store or online at boostmobile.com.

"Today is an exciting day to be a Sprint customer," said Marcelo Claure, Sprint president and CEO. "JAY-Z is a global icon and we're giving customers an incredible opportunity to be among the first to experience his new album 4:44. Our loyal, existing customers, and customers who switch to Sprint, can experience the album exclusively, plus access a complimentary six-month trial of TIDAL HiFi, giving them access to content they can't get anywhere else."