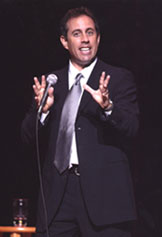 STOCKTON, CA (CelebrityAccess MediaWire) — The city of Stockton and International Facilities Group (IFG), today announced that world-renown comedian, Jerry Seinfeld, will headline the Gala Grand Re-Opening of the Bob Hope Theatre on Sept. 18, 2004. The city of Stockton has contracted
with IFG to provide development and operation management services for the Bob Hope
Theatre.

“Having a performer of Jerry Seinfeld’s caliber is a testimony to the progress the city of
Stockton has made in the past six years,” said Mark Lewis, Stockton city manager. “More
than $150 million has been invested in Stockton’s downtown area, transforming the city into
a hub of commerce and activity. The Theatre, which is the cornerstone of this revitalization,
will be used for live performances, cinema, private parties and other special events that will
reflect our diverse cultural community.”

The Bob Hope Theatre, formerly known as the California Fox, was built in 1930 and is a
nationally registered historical place. “This is the only theater in the country named after Bob
Hope, one of the most beloved entertainers of all time,” noted Gary Podesto, mayor of
Stockton. “Year after year, this beautiful venue will honor his name and memory by hosting
an outstanding line-up of shows and performers.”

Eight and a half million dollars have been invested to revitalize the 2042-seat Theatre. The
renovation includes cleaning, painting and refurbishment of decorative murals, installation of
a marble mosaic floor and a carved granite sidewalk designed by professional artists. A 1928
Robert Morton theater organ, which was last played in the Seattle Fox Theatre over 40 years
ago, was lovingly restored and donated to the Theatre by The Friends of the Fox, a volunteer
organization that has been instrumental in preserving the Theatre. Grants from the U.S.
Congress and the state of Calif.; donations from Stockton resident and developer Alex Spanos
and other private businesses; and funds from the city of Stockton, the Redevelopment Agency
and the Friends of The Fox contributed to the revitalization.

“I am looking forward to performing in one of the few remaining downtown historical
theatres,” said Seinfeld. “The people of Stockton have shown amazing commitment and
dedication towards the improvement of their community, and I am excited to be part of this
historical event.” –by CelebrityAccess Staff Writers