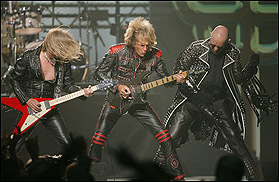 AUCKLAND, NZ (CelebrityAccess MediaWire) — Judas Priest is the latest band to join a growing list of performers who have canceled dates in New Zealand or who have been prevented from playing there.

Priest had been scheduled to play at Auckland's Vector Arena on September 7th, but canceled at the last minute, claiming "logistic and freight issues."

Despite the polite claims of the band and promoter, its worth noting that one of the support bands on Priest's tour, Cavalera Conspiracy had also canceled their Australian and New Zealand dates. On the band's website, a spokesman for the band claimed that: "Cavalera Conspiracy has been deemed an 'inappropriate' band to perform with Judas Priest on their Priest Feast 2008 tour dates in Australia and New Zealand" and that the band was considered "Inflammatory." The post failed to mention who had made these determinations however and how they were enforced.

In the last year, New Zealanders have suffered a spate of performers pulling out of events at the last minute. Maroon 5, Mary J Blige, and NaS, Timbaland have all pulled out of scheduled New Zealand dates, and New Zealanders must have been aghast to learn that former Westlife member Brian McFadden has postponed his October dates. Last year, Christina Aguilera canceled her NZ tour, citing illness while rapper The Game didn't make the scene at The Vector when he was on the road as part of the hip-hop roadshow, Tha Block.

Refunds for tickets are available at the point of purchase and as a conciliatory gesture, the promoter, Dainty Consolidated Entertainment is offering Stevie Wonder tickets at a $5 discount. No cognitive dissonance there at all. – CelebrityAccess Staff Writers