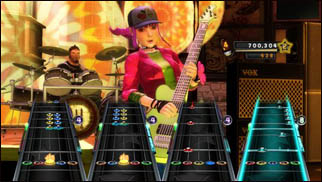 LOS ANGELES (AP) — No Doubt's attorneys can argue to a jury that the band was misled by gaming giant Activision Publishing Inc. about how its likeness would be used in the video game "Band Hero," a judge ruled Tuesday.

The ruling by Superior Court Judge Ramona See rejected a motion by Activision's lawyers to dismiss several claims from the case, including fraud, violation of publicity rights and breach of contract. See determined there were genuine disputes about evidence that a jury should consider.

No Doubt sued the Santa Monica, Calif.-based video game company in November 2009, claiming the band was never told that players would be able to unlock avatars of the band to perform other artists' music.

The case cited instances in which players could use singer Gwen Stefani to perform suggestive lyrics from the Rolling Stones' hit "Honky Tonk Women," or have a virtual version of bassist Tony Kanal sing his band's hit "Just a Girl," but with Stefani's voice.

The lawsuit claimed the feature turns the band "into a virtual karaoke circus act."

See rejected one of the band's claims that sought an injunction barring Activision from using band members' likenesses to perform other artists' work.

Activision has claimed the idea of "unlocking" unadvertised features of a video game has been around since the early days of the industry and the company did nothing wrong.

Attorneys expect the case will go to trial later this year.

Jeffery McFarland, who represents Activision, said the company has a strong defense and is looking forward to presenting it during trial. During the hearing, he said the company had a video recording of the band being told about the game's unlockable features.

The band's attorney Bert Deixler said the ruling "seemed inevitable" and noted No Doubt has repeatedly won the right to pursue the case, in both state and appellate courts.