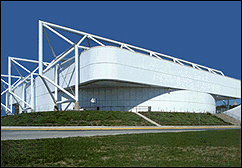 KANSAS CITY (CelebrityAccess MediaWire) — Kansas City officials have been expressing concern about the future of the Kemper Arena, as the newly-built Sprint Center is proving to be a fierce competitor for events.

Ten months into a management deal for Kemper with AEG, the Kansas City Council re-evaluating its position, including some loose talk about taking up with Global Spectrum.

"I am disappointed in the way things have worked out so far," Mayor Mark Funkhouser told the Kansas City Star. "I am looking forward to seeing a re-use plan soon."

The City Council had hoped that a deal with AEG would lead to an increase in events, including so-called dirt events such as motocross, truck and horse shows at the arena. Currently, the Kemper has been hosting about two events a month, when it used to hold nearly triple that number before the Sprint Center, also operated by AEG, opened. Furthermore, at least three of the coveted dirt events have gone to the Sprint instead of the Kemper this year.

While AEG has only been managing the Kemper for three months, some council members are already talking about a change and are concerned that having one company operate both venues may be a conflict of interest.

"We went into this whole arrangement with a false pretext," Councilwoman Deb Hermann, chairwoman of the committee that recommended AEG over Global Spectrum told the Star. "I'd like to look at that decision again."

The city's sudden concern for the Kemper may be somewhat disingenious and according to the KC Star, AEG's contract with the city had stipulated only 26 events a year, excluding the American Royal livestock events.

AEG contends that it has been doing its best to bring events to the Kemper and has stated that they "failed to ancitipate the declining condition" of the facility.

"I think we just need to get our arms around it and get everyone going in the same direction," AEG SVP Brenda Tinnen told the Star. "It is going to take time. We are continuing to move forward."

The City is also making some less drastic changes on their own. Currently, the city still carries $15 million in debt for the Kemper and as a means of bringing the arena's operations back into the black, they have doubled the user fee on tickets sold there. – CelebrityAccess Staff Writers