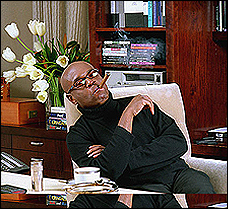 Reid's tenure at Arista has seen the successes of Outkast, Pink, Dido, Neptunes, Usher, Avril Lavigne and others. Reid grew up in Cincinnati, entering the music world as a member of The Deele, a group which also included Kenneth "Babyface" Edmonds. Both went on to establish themselves as producers and label heads, founding LaFace Records which established the careers of TLC, Toni Braxton and OutKast among others.–Bob Grossweiner and Jane Cohen