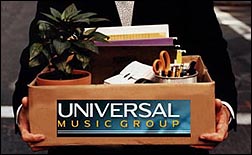 (CelebrityAccess News Service) – Universal Music Group (UMG) plans to cut 800 jobs worldwide, including 190 in North America, as part of a restructuring to save $200 million per year as a response to the ongoing slump in music sales. UMG blames illegal downloading for the three year downturn in CD sales. UMG had already cut 550 jobs from its payroll earlier this year. The cuts will reduce the staff from 12,200 to 10,850 worldwide.

“Like all responsible companies, Universal Music Group is continually evaluating its business in order to maintain the most efficient and competitive music company in the industry and be well-positioned for the future," the company said in a statement. "UMG is in the process of instituting significant cost-cutting initiatives that take into account the realities of the declining music market to further rationalize the company’s cost structure around the world,” it said."–Bob Grossweiner and Jane Cohen

Beatles Let It be to Be Rereleased in Naked Version

(CelebrityAccess News Service) – The Beatles' 1969 album "Let It Be" will be re-released on November 17 in what has been called a "naked" release–just the bare sound of the band inside The Beatles. "Let It Be…Naked" will be the
no frills, back-to-basics album that The Beatles first set out to make which was never released as they intended. Now, through the digital technology of Abbey Road Studios, the never-heard band’s takes of the original sessions will be finally released worldwide by EMI Records without the Phil Spector orchestrations.

The de-mixed and re-mixed, un-dubbed orchestration, choirs and effects are stripped-back to the raw to reveal The Beatles simply as what they were very best at being, is a bit unusual in this era. “If we’d have had today’s technology back then, it would sound like this because this is the noise we made in the studio,” Paul McCartney said. “It’s all exactly as it was in the room. You’re right there now."

“When I first heard it, it was really uplifting. It took you back again to the times when we were this band, the Beatle band,” Ringo Starr added.

When The Beatles first set out to make the album in 1969, they intended to record an album that would be a return to live performance of just the bare necessities of the band, no studio effects or overdubbing of voices or instruments would be allowed. However, caught in the turmoil of the break-up of the band, the album was re-produced by Phil Spector and never released as The Beatles had originally meant it to sound. Until now.

"Let It Be…Naked"’s track listing differs from the 1970 release; background dialogue, Dig It and Maggie Mae have been taken off the album and Don’t Let Me Down has been added to the running order, which now is as follows: Get Back, Dig A Pony, For You Blue, The Long And Winding Road, Two Of Us, I’ve Got A Feeling, One After 909, Don’t Let Me Down, I Me Mine, Across The Universe, Let It Be.

"Let It Be…Naked" will be issued together with a bonus fly-on-the-wall disc that features extracts from tapes of The Beatles at the time of first making the "Let It Be" album and movie in the '60's. The 20-minute bonus disc is a unique insight into of The Beatles at work in rehearsal and in the studios in January 1969. "Let It Be…Naked" will also come with a booklet that features historic photography of the recording sessions and extracts of band dialogue from the original booklet that first accompanied early copies of the 1970 album.

“The music always surpassed any bullshit we were going through; once the count-in happened we turned back into those brothers and musicians,” said Starr.

“For all our success The Beatles were always a great little band. When we sat down to play, we played good," Paul McCartney said.

“In spite of all things, The Beatles could really play music together," once said John Lennon. –Bob Grossweiner and Jane Cohen