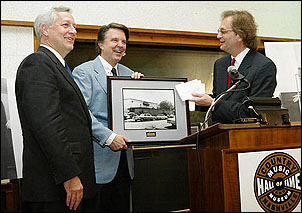 Mike Curb put to rest recent speculation regarding his development of a new label as he confirmed the formation of a second country imprint. The yet unnamed label will reunite the successful team of Dalton, Johnson and Lameier. Says Curb, "We've seen a lot of changes within the country music community this past year. However, I truly believe that country music is on the rebound and creating a new country label is a reflection of my confidence in it."

Rob Dalton, former VP of promotion for Epic Nashville will head up the new label as VP of country promotion. Doug Johnson, previous head of Giant Records and past VP of A &R at Epic Nashville, will assume A &R responsibilities. Jack Lameier will consult.

Dalton confirms that he's ready to take the reigns, "The opportunity to work for Mike Curb is exciting and inspiring. I look forward to great things! Doug Johnson is one of the best song men in this business and to work with him again should be amazing. We had a lot of hits together. To be with Jack Lameier, Mike Rogers and Mark Westcott again is like a family reunion. Combine all that with John Curb, Keith Greer and Rick Cardarelli in the field and we've come to play!" Johnson seems to agree, "The opportunity to be part of a new label with Mike Curb and to be reunited with Rob and Jack excites me! Their level of passion, commitment, experience, respect and work ethic is impeccable."

An announcement of the confirmed label name and artist roster is forthcoming. Rob Dalton and Doug Johnson can be reached at their new Nashville office, beginning January 6 at (615) 321-5080.

Layoffs are expected at Atlantic Records as staffers recently received a memo from Atlantic chairman Val Azzoli. It read: "As the marketplace changes, we must respond and adapt to the new realities of our business. Atlantic will be undergoing a restructuring shortly after the first of the year." Sources indicate about 12 out of 250 staffers are in jeopardy.

The Yarbirds, the seminal British rock guitar band, first with Eric Clapton, then with Jeff Beck and finally with Jimmy Page before he formed Led Zeppelin, is back. The Yardbirds is putting the finishing touches on its first new studio recording since "Little Games" in 1968. "Birdland" will be released on April 22on Favored Nations Recordings, Steve Vai's imprint.

Jeff Beck guests on "My Blind Life." Other special guests include guitarists Brian May (Queen), Steve
Vai, Slash, Joe Satriani, Steve Lukather,Slash, Johnny Rzeznik and Jeff "Skunk" Baxter. Producer Ken Allardyce (Weezer, Fleetwood Mac, Green Day, Goo Goo Dolls), actually saw the Yardbirds open for the Beatles at Hammersmith Odeon in 1964 and has been a fan ever since. The album contains newly recorded versions of eight of the Yardbirds' best known hits — "I'm Not Talking," "The Nazz Are Blue," "For Your Love," "Train Kept A Rolling," "Shapes of Things," "Over, Under, Sideways, Down," "Mr. You'-
re A Better Man Than I" and "Happenings Ten Years Time Ago"
— plus seven new songs.

"To make our first album in so many years has been a lasting ambition of ours," Dreja said. "We wanted to do our original songs and our new ones with modern production while preserving the essence of our sound. It was a labor of love, and we're grateful to everyone who helped — our guest musicians and especially to Steve Vai. To me, it doesn't sound like we've been away for 35 years. The Yardbirds are still a kick-ass, high-energy band — and that
comes across on this album."

On February 11 George Strait will release For the Last Time – Live From the Astrodome (MCA Nashville), his first live disc ever. The 16-song collection, recorded on the closing night of the "Houston Livestock Show and Rodeo" on March 3, contains some of Strait's biggest hits like "Amarillo By Morning" and his latest #1 single, "She'll Leave You With A Smile."

The Houston Astrodome was home to the "Houston Livestock Show and Rodeo" for the last 37 years. On its final night, Strait played to a record-breaking crowd of 68,266 people, marking the largest ticketed audience for any event held at the dome. Among those in the audience were President and Mrs. George Bush. The former President took the stage to present Strait with an award saying, "It is an honor to give this final award to the guy that deserves it the most. Everybody at the rodeo loves him, everyone in Texas loves him and everyone across this country loves his music. And I can tell you, he's just as great a guy in person as he is up here on this stage. George, well done sir."

Co-produced by Strait and long time collaborator Tony Brown, For the Last Time will mark Strait's 30th album release. Said Brown, "I have worked with George on 12 albums, and the man never fails to amaze me. He has integrity and a very keen sense of who he is musically. Working with him on his first live recording is certainly one of the milestones of my career."

From the stage that evening and caught on tape for the disc, Strait reminisced about the first time he played the Rodeo. "It really does seem like only yesterday when the late great Eddie Rabbitt got sick that night," said Strait. "They called me, and I'd just got in from a tour. They said, 'Can you be at the Houston Astrodome to play at the rodeo in about two hours?' and I said, 'Hmm… This has got to be a joke.' I managed to get a hold of everybody and they put us on an airplane and flew us up here. What a night that was and it's been great ever since."

Strait will return to Houston on February 25, 2003 for the opening ceremonies of the "Houston Livestock Show and Rodeo" in its brand new home, the newly built Reliant Stadium.

Track listing "For the Last Time–Live From The Astrodome:"

1. Deep in the Heart of Texas

3. I can Still Make Cheyenne

16. The Cowboy Rides Away

Rockett plays drums on all tracks and sings on "Life's A Gas," originally done by T. Rex.

When Poison was first put together in the mid-1980s, the band was considered a 'glam' band because of the makeup members wore. By the time their 1990 album "Flesh & Blood" was released, the band had toned downed that image considerably.

Poison's songs include "Every Rose Has Its Thorn," "Unskinny Bop" and "Something To Believe In."

Musicians who help Rockett out on the album include Poison band mates Bret Michaels and C.C. DeVille and Gina Shock of The Go-Go's. The album is available through the site www.Glitter4YourSoul.com.

The Island Def Jam Music Group, a division of Universal Music Group, is embarking on a new strategy to connect with consumers instantly, making songs available for purchase online to fans as soon as they hit the radio airwaves. The songs will be available for purchase as digital downloads to consumers through a host of leading retail and music Web sites, as well as legitimate subscription services that have licensing agreements with Universal Music Group. Island Def Jam is amongst the first labels in the industry to offer content online as early as the radio impact date and plans to do so throughout 2003. The downloads are burnable to CD and transferable to secure portable devices.

The initiative kicked off on January 7 when American Hi-Fi's track "The Art of Losing," debuts at radio, and will then be exclusively available to consumers for purchase online in the U.S. for 99 cents, weeks before the album, The Art of Losing (Island Records), is released on February 25. A complete list of those sites selling UMG a la carte downloads is posted at http://www.umusic.com/newformats/retailers. The digital tracks will also be available for purchase on several subscription services, Listen.com, MusicNet and Pressplay.

"Our new strategy, to provide consumers with the ability to purchase Island Def Jam music online the day it hits radio, provides music fans with an immediate opportunity to own music prior to album release dates. It's a winning situation for the consumer, Island Def Jam and retail — the consumer gets an early experience of artists' new singles and the industry benefits by assessing consumer reactions as they purchase the tracks online," said Larry Mattera, vice president, New Media, The Island Def Jam Music Group.

has signed three new deals: Joan Baez, Laura Love and Eileen Ivers. Ivers' CD is set for release on February; Baez and Love will hit the street in the second quarter of 2003. Bob Frank, president of KOCH Entertainment says, "We're thrilled and pleased to be working with such gifted artists. What a great way to start the New Year."