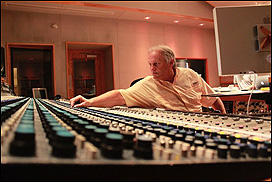 LOS ANGELES (CelebrityAccess MediaWire) — Roger Nichols, who's recording work with Steely Dan and other musicians garnered seven Grammy Awards died on April 9th after a fight with pancreatic cancer. He was 66.

A native of Oakland, California, Nichols' family moved often during his early life, following his father who flew B-47s for the Air Force. Nichols attended high school in Cucamonga, California, where he met fellow student Frank Zappa, with the two often playing guitar together and using a reel-to-reel tape to record the sessions.

After attending Oregon State University, where he graduated with a degree in physics, Nichols spent three years working at the San Onofre Nuclear Generating Station before launching a career in music in 1968.

Nichols, with some friends, built and launched Quantum Studios, a recording studio along with a high end audio equipment supply business. Some of the artists who recorded at Quantum included Karen Carpenter, Kenny Rogers and First Edition.

Nichols then joined ABC records where he met the duo that would become Steely Da; Donald Fagen and Walter Becker. Nichols recorded Steely Dan's first album and because of his perfectionism, became their engineer of choice, earning the sobriquet of "The Immortal" in Steely Dan's liner notes.

Nichol's work wasn't limited to Steely Dan and he worked with numerous artists over the course of his career, including Diana Ross, the Beach Boys, James Taylor, John Denver, Bela Flek & The Flektones, Crosby Stills & Nash, Al DiMeola and Placido Domingo, to name a few.

Nichols won 7 Grammy awards, including six for his "meticulous" work with Steely Dan. In 2005, he was presented with the Lifetime Achievement award by the National Academy of Recording Arts & Sciences (NARAS).

Nichols was also an innovator, and through his company Digital Atomics, he developed the Wendell Sampling Computer, a sampling/drum machine as well as a rubidium nuclear clock designed to provide accurate time measurement for digital recordings. Nichols also served as a long-time columnist at the professional audio magazine, "EQ."

Nichols was diagnosed with stage 4 pancreatic cancer in 2010 and after a year-long fight, he succumbed to the illness on April 9, 2011.

Nichols is survived by his wife, Connie; two daughters, Cimcie and Ashlee; a sister, Melinda Ryan; and a brother, Jeffrey Nichols. According to Nichol's website, his treatment left him nearly bankrupt and a fund has been set up to help the family cover medical expenses. If you are able to make a donation to help the family, here's a paypal link. – CelebrityAccess Staff Writers