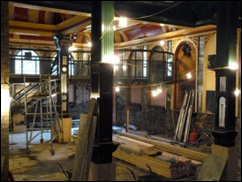 MANCHESTER, UK (VIP-NEWS) — Band On The Wall is reopening in September 2009. One of the cornerstones of Manchester's music scene for the greater part of the last century.


It was at the centre of Manchester’s punk scene in the late 1970s when Buzzcocks, The Fall and Joy Division first played. Since then it has played host to many internationally acclaimed artists including Mica Paris, Bjork, Art Blakey, Carleen Anderson, John Martyn and countless others.


Closed in 2005 for redevelopment, the venue opens in September 2009 with state-of-the-art new facilities and incorporates The Picturehouse in the adjacent building that will provide a new social space and host complimentary events throughout the year.


Band On The Wall is operated by Inner City Music – a registered charity run on a not-for-profit basis.