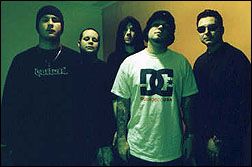 KATOWICE, Poland (CelebrityAccess MediaWire) — Limp Bizkit canceled its concert in Poland on March 22 due to a bomb threat that was deemed serious. Fred Durst posted on the band's website: "Last night we had a serious bomb threat at the venue in Katowice Poland. Five minutes before we had to go on stage, the chief of policia came into our dressing room with the promoter and told us someone called the police and said to evacuate the building in one hour. The promoter wasn't really concerned at all for anything but his money, but the policia said that he could not say if it there was a chance it was or was not going to happen."

"At that point I made the decision to

evacuate the building and announce the problem to the audience," he posted. "The policia and the promoter were very concerned there would be a riot. They actually said it was 100% that the fans would start one."

wrong," noted Durst. "The fans in Poland were very cool under these circumstances and were very respectful to authorities. We did not know what to think about the whole situation, but we are glad that everyone is safe. I am very sorry that happened to all of you in Poland. We will be back. We also have all the video footage of the promoter and chief of policia informing us of the bomb threat. We are working on cutting it together for you asap. Man, what the fuck is going on with our planet? our societies? our minds? it is a beautiful thing to be alive. If you get a chance try to reflect on the good things we have today. At least we have the life to reflect. Think about it. On the road again…" –Bob Grossweiner and Jane Cohen