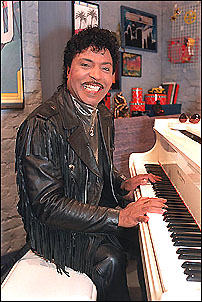 Little Richard, 69, plans to retire at the end of the year. "This is my last tour," he told the New York Post in a long interview. "I'm retiring at the end of the year. I'm going to be 70 years old on December 5. I've been making music since I was 8 years old, and I'm tired now. I've never taken a vacation. I work every day, year in, year out. I think that when you get tired it's time to move over. Since this is the end, I'm gonna give everything I've got in every show I have left."

"I give 100 percent on stage," he maintains. "You want to see Little Richard, the Architect of Rock 'n' Roll, and have a good time, hurry because this is it. This is going to be a historic event. I'm going back to the South for rest. I'm from Georgia, and I want to rest there. Los Angeles isn't restful at all. I haven't decided what I'm going to do, but I won't be traveling for rock."

One of his last shows was August 4 at the Westbury Music Fair in Westbury, Long Island on a bill with Chuck Berry. However, Richard has had a long standing rift with his fellow Rock and Roll Hall of Famer.
"We've got a big problem with him," he told the paper. "Well, you know, everywhere he plays, he wants to be the star. Do you understand? I like him, I respect him. He is a great pioneer of music, a great legend. When he has a party, I go, but he's not the friendliest man in the world