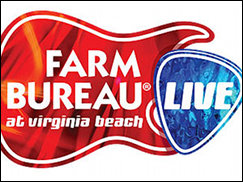 Effective immediately, the amphitheater will be called Farm Bureau Live at Virginia Beach.

SaveOurFood.org was also named as this year’s title sponsor for the Country Megaticket whose line up includes Brad Paisley on June 3, Rascal Flatts on June 19, Tim McGraw on July 9, Toby Keith on July 23, Kenny Chesney on August 4, and Jason Aldean on September 11.

The Save Our Food campaign was created by Virginia Farm Bureau to educate consumers about the foods they eat, help protect Virginia agriculture and ensure that Americans will never depend on foreign food sources.

"We believe Farm Bureau Live at Virginia Beach will elevate awareness for our organization, our insurance products and our Save Our Food campaign in support of Virginia’s farmers. We look forward to working with Live Nation in the coming months, and we think this sponsorship is something about which Farm Bureau members will be excited," said Matt Smith, director of marketing for Virginia Farm Bureau, according to the press release.