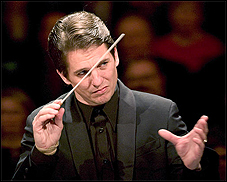 BOSTON (CelebrityAccess MediaWire) — Conductor Keith Lockhart has been named artistic advisor of the Brevard Music Center's (BMC) summer institute and festival, effective October 1, 2007. Currently music director of the Utah Symphony and conductor of the Boston Pops, Lockhart succeeds David Effron, who retires after an 11 year tenure as artistic director and principal conductor at the conclusion of the 2007 summer season.

"I have known Keith for twelve years," remarked President and CEO John Candler. "With every visit to Brevard Music Center, his interest in our educational mission has grown stronger. We are most fortunate to have one of our own, an individual prominent in the music world, to provide artistic vision and leadership as we continue to develop and nurture young talent. Under his artistic leadership, we are confident the Brevard Music Center will continue to flourish as one of the country's top summer educational festivals."

Under the leadership of only three artistic directors since its inception in 1936 – David Effron, Henry Janiec and James Christian Pfohl – the Brevard Music Center has since established itself as one of this nation's leading summer institutes and festivals. Located in the Blue Ridge Mountains of western North Carolina, BMC welcomes to its 140-acre campus each year 400 students, represented this summer by 42 states and eight foreign countries. They are joined by 65 distinguished faculty artists drawn from the most prestigious conservatories, universities and orchestras in America. In addition, the festival invites an array of celebrated guest artists who perform and present seminars and master classes.

The terms of an initial five-year contract state Lockhart will spend a minimum of two weeks at Brevard Music Center each summer, leading as many as four concerts. Despite being one of the busiest conductors today, Lockhart is a dedicated educator as well. With both his Boston and Utah ensembles, he has participated in a variety of initiatives to engage young people, nurture future talent and give back to the community.

"Brevard Music Center holds a very unique place in my heart," said Lockhart. "Having spent two influential summers here as a teenager myself, I understand the importance of fostering the talent of focused and committed young musicians. It's a constant marvel to me to come here and see the work remains the same, the work continues. So many outstanding young people, so much promise fulfilled and so much promise yet to be fulfilled. It's an inspiration to me, and I think to my colleagues in the profession, to continue to work in such a wonderful place."