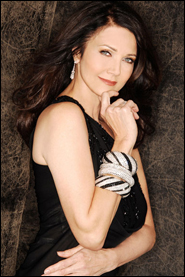 NEW YORK (CelebrityAccess MediaWire) — Lynda Carter, best known for her starring role as TV’s “Wonder Woman”, resumes her singing tour this spring in select us cities including appearances at Lincoln Center in New York and the Kennedy Center for the Performing Arts in Washington, DC. with a brand new concert: “An Evening with Lynda Carter”. Headlining from Harrahs in Atlantic City to Los Angeles’ Catalina Jazz Club to New York’s Feinstein’s at the Regency, she offers a repertoire of jazz, blues, and country in a dynamic and sexy show. Her new CD, “At Last”, recorded in Nashville, will be out this spring.


“Singing is in my soul,” said Ms. Carter. “I started singing professionally when I was 14, and was on the road performing when I was 17. I traveled and sang from the Catskills to casinos in Las Vegas and from San Francisco to The Palladium in London.” She left the road to raise a family, and now she is back to pursue that one first love – singing.

Throughout her television and film career, Lynda has never given up her love of the stage, appearing before enthusiastic audiences around the world. Carter’s illustrious stage presence was featured in a series of Emmy award-winning television specials on CBS, which she produced and hosted while singing with such guest stars as Ray Charles, Kenny Rogers, Merle Haggard, and Tom Jones. After her starring role in London’s West production of Chicago in 2006, she now continues to follow her passion on stages from coast to coast.

A few reviews of her performances include the following: “She looks you in the eye, grabs your attention and never lets go…This is Lynda Carter’s night, total and triumphant. The woman is truly a wonder.” NY DAILY NEWS. “Ms. Carter has the beauty, confidence and charm of a thoroughbred.” – NY TIMES – November 1, 2007.“Expect to hear a well-polished set from a performer who can deliver a song even better than she can take down a bad guy.” – LA Times – June 23, 2007

Carter recently signed with Ed Bazel of The Bazel Group, Inc. “We are very proud to welcome Lynda Carter to our boutique roster of Artists,” Bazel said. “Lynda delivers that special combination of class, elegance and sensuality, and her band is packed with an all-star lineup of players. Lynda is perfect for corporate events where the meet & greet, and show, are equally important. Her casino, symphony dates and performing arts appearances consistently receive great reviews, and she has a tremendous fan base too.”