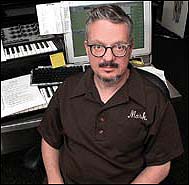 (CelebrityAccess MediaWire) — Composer and artist Mark Mothersbaugh, best known as being the leader of Devo, will receive the 2004 Richard Kirk Award for Outstanding Career Achievement at the BMI Film & TV Awards held May 12 at the Regent Beverly Wilshire Hotel in Beverly Hills. The event will be hosted by BMI's President & CEO Frances W. Preston. Composers of the top-grossing films of the past 12 months as well as the top-rated prime-time network television series and cable programs will also be honored that evening.

One of the most unique and prolific contemporary composers in film, television, interactive media and commercials, Mothersbaugh was a founding member of DEVO parlaying his avant-garde musical background into the world of scoring for filmed and animated entertainment. An artist both musically and in the literal definition, Mothersbaugh has created an aural framework with his scores for the forthcoming films "Lords of Dogtown" and "The Life Aquatic;" as well as having scored the hugely successful "Rugrats" television, stage and film franchise. He has also scored a diverse array of films and television shows, including "Thirteen," "The Royal Tenenbaums," "Rushmore," "200 Cigarettes," "The Adventures of Rocky and Bullwinkle," "Happy Gilmore," "The Mind of The Married Man," "Power Puff Girls," "Pee Wee's Playhouse," "Beakman's World" and more. With over 100 credits in the medium including over 400 commercial credits, Mothersbaugh is also co-owner of Mutato Muzika, an umbrella company that is home to a full-time staff of composers and music editors. –Bob Grossweiner and Jane Cohen