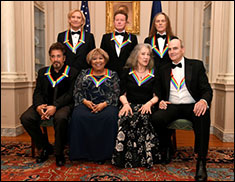 Despite the star power in attendance, the biggest standing ovation was reserved for President Obama, who was in attendance with his wife Michelle. Following the ovation, host Stephen Colbert offered some both some praise and a sly joke aimed at the president.

“For the past eight years, the White House has given us a leader who’s passionate, intelligent and dignified,” Colbert said, prompting the president to rise in response to another sustained ovation from the crowd before Colbert quipped, “Sir, I don’t even know why you stood up. I was talking about Michelle.”

The Eagles were honored the previous night during a dinner at the State Department. They were due to receive the award in 2015, but postponed their participation after band co-founder Glen Frey became ill. He died Jan. 18 at age 67 from complications of rheumatoid arthritis, acute ulcerative colitis and pneumonia.

“I want to dedicate this evening to our brother Glenn,” Henley said as the band accepted its honors Saturday night at the State Department. “He was so much a part of our success. He was the driving force in this band. He believed in the American dream.”

“2016 couldn’t have had a harder beginning or a more appropriate ending,” added Irving Azoff, the group’s longtime manager, choking back tears in an emotional moment after the band received their award. – Staff Writers