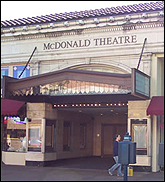 (CelebrityAccesss MediaWire) — Geiger Investments, the company that owns the McDonald Theatre in downtown Eugene, Oregon, caught up on back payments on a $1.76 million loan this week, putting an end to foreclosure proceedings that would have put the historic structure on the auction block.

The settlement came just one day after a county judge appointed a receiver to manage the venue until the foreclosure was resolved, according to the Eugene Register-Guard.

Geiger Investments bought the building in 1997 for $1.3 million. In March 2005, it borrowed $1.63 million from BLX Capital and put up the theater as collateral. BLX later sold the loan to SPCP Group.

As of April, Geiger was $125,715 behind on payments, after making only a partial loan payment in January and missing the next three months.

In April, SPCP Group began foreclosure proceedings and prepared to sell the building at auction on June 6.

The settlement removes the cloud over concert promoter Kit Kesey’s head, the building’s main tenant, as he had been having some difficulty booking acts past June. Previously, he had told the paper that theater would remain in business whether or not the building was sold at auction.

The McDonald Theatre opened in 1925 as the Lowell Theater and is listed on the National Register of Historic Places. –by CelebrityAccess Staff Writers