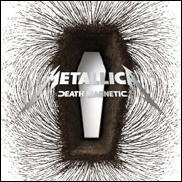 NEW YORK (VIP-NEWS) — In just a three-day sales window, hard rock band Metallica's first studio album since 2003 debuted at No. 1 on the U.S. pop chart with one of the biggest tallies of the year.

"Death Magnetic" moved 490,000 copies in its abbreviated frame, scheduled off-cycle on a Friday to accommodate a worldwide release date. Albums usually come out on a Tuesday in the United States, and a day earlier everywhere else.

The total outdistances the opening sum for Metallica's last studio set, "St. Anger," which sold 418,000 copies during a similarly shorter-than-normal window in 2003. That album is now considered a critical and commercial disappointment.

The last Metallica album to stage a larger opener than "Magnetic" was 1996's "Load," which rolled 680,000 units in its first six days.

"Death Magnetic" marks Metallica's fifth chart-topping start on The Billboard 200. The band's last chart appearance was for the soundtrack EP "Some Kind of Monster," which debuted No. 37 in 2004.

The tally for "Death Magnetic" is the biggest number the chart has seen since five weeks ago, when the Jonas Brothers' "A Little Bit Longer" scaled the list with 525,000 copies with a traditional Tuesday release date. Artists with bigger first-week tallies this year include rapper Lil Wayne with a million copies for "Tha Carter III" and Coldplay with 722,000 for "Viva la Vida or Death and All His Friends." According to Reuters