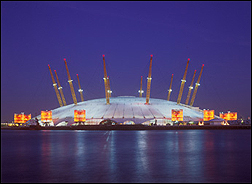 (CelebrityAccess MediaWire) — The United Kingdom’s highly controversial Millennium Dome, recently renamed “The O2,” is facing even more harsh criticism in light of two major setbacks: a parliamentary committee report saying the project’s finances have been handled badly at the same time as the news that the venue’s former head of lighting design had cheated it out of £4 million.

According to the Guardian Unlimited, Tory chairman of the Commons public accounts committee Edward Leigh said that only an “incurably optimistic” person could believe that Lord Falconer, the lord chancellor, got a good deal for the taxpayer over the sale of the Millennium Dome and its 168 acres of development land to a consortium led by developers Meridian Delta and Anschutz Entertainment Group.

The complex deal keeps the dome in place until 2018, with a large indoor arena and leisure complex, set to reopen as a concert venue by 2007, and a major office development and 10,000 news homes. The profits off the development will be shared between developers and taxpayers.

The parliamentary report harshly criticized the government for not telling all potential bidders how much land was on offer.

The deal was only negotiated after the first attempt to sell the dome, which faced a lackluster performance upon first opening for the year 2000, failed because of a lack of offers. It was decided to sell to the single consortium that bid afterwards, once it was agreed it could have an extra 100 acres.

Only about a week before the report was filed, the former head of lighting design at the Millennium Dome was sentenced to 4 1/2 years in prison for masterminding a £4 million fraud against the bosses of the southeast London attraction.

Simon Brophy took advantage of the “chaos” leading up to the millennium celebrations in 1999 to secretly set up a company to which he awarded a lucrative contract for lighting up the Dome before funneling his profits through a web of overseas bank accounts.

Brophy associate David Gordon admitted conspiracy to defraud and fraudulent trading, and was sentenced to 9 months. –by CelebrityAccess Staff Writers