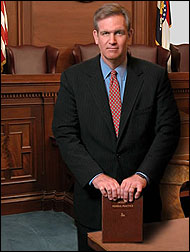 Nixon alleges that the defendants’ scalping of tickets violates state consumer protection laws by the selling of tickets at prices far above face value in violation of a Kansas City municipal ordinance against scalping. One of the defendant’s Web sites does this while misrepresenting that it enforces the most stringent rules and highest ethics in the industry.

"These companies are able to employ inappropriate means, using sophisticated software, to hoard all the tickets to high-demand events and then turn around and sell them at grossly inflated prices," Nixon said. "It’s a blatant rip-off of consumers who attempt to purchase tickets in good faith through the proper means and are met with nothing but frustration."

Nixon’s lawsuits against the brokers, filed in Jackson County Circuit Court, are requesting that the court orders the defendants to comply with the law, and pay restitution, appropriate penalties and court costs.

Nixon also brokered a deal with Ticketmaster, the primary vendor of the sought-after Hannah Montana tickets in which 1,000 tickets for each of the two dates that Miley Cyrus has in Missouri will be made available to the public. Under the agreement, purchasers will be limited to just two tix and need to show up in person, with photo ID at the venue box office to collect their purchase.

"We wanted to make sure that a lot of frustrated moms and dads, with their disappointed kids, had the opportunity to purchase tickets to these concerts at face value," Nixon said. "This agreement allows us to do so, and we are pleased at the cooperation we received from Ticketmaster in reaching this accord."

This palliative may quiet the immediate tumult generated by the Hannah Montana ticket fiasco in Missouri, however, it actually showcases the systemic problems inherent in Ticketmaster's system. Ticketmaster, with a virtual monopoly on ticket sales has little vested interest in discouraging the secondary ticket business. If secondary ticket speculators are virtually ensuring that all Ticketmaster events will be sold out and are unlikely to complain about the high "service fees" that Ticketmaster attaches to the face value of each ticket, they are in essence, the perfect customer for Ticketmaster – fans be damned. – CelebrityAccess Staff Writers