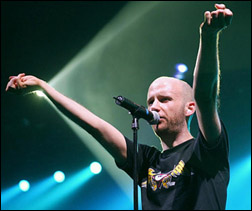 Moby plans to revamp his stage show to include sets of cover versions when he tours
in December at various radio station holiday concerts, and on his Web site, says he is
planning something "quite different" for his homecoming tour.

"In Boston on Dec. 11," he wrote, "we'll be playing a more dance oriented (rave oriented,
even….although I