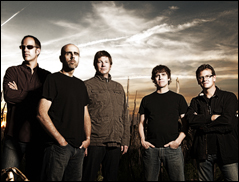 (CelebrityAccess) — Jam band veterans moe. announced that the band was going on an indefinite hiatus as of August while bassist and founding member of the band Rob Derhak undergoes treatment for cancer.

In a statement released by the band, they confirmed that they will still perform three more shows: July 21st at the Playstation Theater in New York City; July 29th at Huckleberry Jam and the Lockn' Festival with Phil Lesh in late August.

In a letter released to his fans, Derhak wrote:

Early last week I was diagnosed with oropharyngeal cancer. Although I'd known something wasn't quite right for a while, I wasn't expecting to get this news. The prognosis is good, and the survival rate is high. Unfortunately the treatment will be rough on my body, and my voice. I will be out of commission for the foreseeable future, which means, moe. will be going on an unplanned hiatus. My treatments will begin in early August, and I will not be available for our planned summer tour. I'm very happy that we, as a band and a fan base, were able to successfully bring moe.down music festival back this Summer and I thank you all for your support. My love for our music, my band mates, our crew, and all of you continually grows and I hope to be back on stage doing what I love to do sometime soon. Until then, know that I'm in good hands, and I'm forever grateful for all of your support.