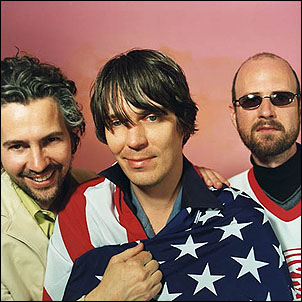 As war with Iraq looms, some attention has turned to musicians — once a potent political force — and their power to shape public opinion.

Not surprisingly, musicians are divided over whether it's even their place to comment on weighty issues of the day. Some sympathize with those who groan when artists start prattling on about foreign affairs like they're on Sunday morning talk shows:

Wayne Coyne of the Flaming Lips: ''When I'm sitting at home and I see pop stars acting like they know what's going on, I'm like, 'Come on.' Artists tend to think their songs are just as powerful as guns. I don't believe that at all. I don't think songs change the world. 'Blowin' in the Wind' is a great song, but from what I can tell, it hasn't saved one person's life. Protest songs are great and protesting is great, but sometimes people question everything but themselves.''

Norah Jones: ''I thought about talking about politics [at the Grammys], but I don't want to use that platform unless I have something huge to say.''

Art Garfunkel: ''I don't know if it's appropriate to use the spotlight you gain from music and shift it over to politics, even though there's much to be said.''

Others see it as musicians' natural role — even their responsibility — to voice opinions and galvanize popular opinion on issues of the day:

Carrie Brownstein of Sleater-Kinney: ''It's extra important right now to have a message or meaning in your music. I don't really believe in being didactic or standing on a soapbox, but using your cultural power and seeing music as a populist medium and one that inherently reaches a lot of people, there are ways of turning that into something empowering and political without giving a speech.''

India.Arie: ''This is our platform, this is our vehicle. I challenge all of my peers to do more. Not just in your words, and giving your money, but in your music — that's what people hear.''

Mike Mills of R.E.M.: ''When people start spouting off on things and they don't bring new ideas to the table, it can sound kind of impotent. But musicians and entertainment figures actually have the time and interest to know about these things. And the more you know about this, the angrier it should make you, and you're more inclined to speak out.''

In the '60s, music and politics were much more intrinsically linked. People looked to musicians for songs of protest, and often, those songs became major pop hits. That's hardly the case today, a fact that many musicians blame on changing times, attitudes, and politics.

Billy Bragg: ''Our biggest enemy in trying to make a better world is cynicism. In the '60s, politics were more ideological than they are now. In my generation, American songwriters have not really addressed ideological politicism because they didn't grow up in an ideological, political world.''

Brownstein: ''Young fans are growing up in a time when that's not music's role in our culture. People aren't turning to Britney Spears and Eminem as spokespeople for the antiwar movement. In the '60s, everything seemed to synthesize, in that the people that were popular were also the ones protesting the war. That's not happening now.''

Serj Tankian of System of a Down: ''It's harder to find people to make public statements now, because when you do, you're putting yourself in the position of being critiqued. It's a lot harder to say what's on your mind without being challenged just for speaking your mind than it used to be.''

Tom Morello of Audioslave: The reason you heard so much protest music in the '60s and '70s was because [there was a war in progress]. You saw on television every night that your tax dollars were used to napalm Vietnamese children. People wouldn't stand for it if they saw [the same thing today]. When you're closed off from the situation, your empathy doesn't kick in.''

Still, some experienced musicians are hopeful that as war nears, there WILL be a protest movement to rival that of the Vietnam era.

Joan Baez: ''There are lots of songs, and there have been over the past years, but with what's happening to radio conglomerates, there's not a chance they will be heard other than [small stations]. More songs will be heard, but you're going to have to go to the rallies.''

Bonnie Raitt: ''I think the people are rising up a lot faster now than they did in the '60s. We haven't gone to war yet, so I'm hoping the groundswell will continue and we'll be able to stop and rethink what we're planning.''

Bragg: ''The bottom line for artists is to engage. You gotta engage, however you do that. If you don't engage, you might as well be selling soap powder.''