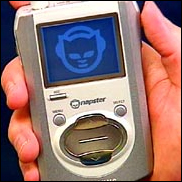 The results surpassed Wall Street expectations that Los Angeles-based Napster would lose 61 cents per share on revenue of $19.9 million, according to a survey by Thomson Financial.

During the first quarter, Napster's paid subscribers — excluding university subscribers on summer break — surged 13 percent sequentially and more than tripled from the same period last year. Those subscribers grew to 402,000 from 356,000 during the period.

"Napster continues to make strong progress as we recorded our fifth consecutive quarter of double-digit revenue growth and signed significant strategic partnerships with some of the world's leading technology companies including XM Satellite Radio, Ericsson and Dell," Chairman and CEO Chris Gorog said in a statement.

The latest of those ventures is one with Tower Records Japan that will be called Napster Japan and begin within the next year. The new venture will initially operate out of Tower's Tokyo headquarters.

Tower will contribute up to $7 million in cash and undertake additional funding obligation in exchange for a 70 percent majority stake in Napster Japan. Meanwhile, Napster will provide $3 million in cash for its interest in the joint venture.

The company is also on track to launch in Germany within a year, Gorog said.

Napster's sales in the United Kingdom accounted for 12.5 percent of total sales during the quarter, he said.

Looking ahead, Napster expects to report second-quarter revenue in the range of $21 million to $23 million. Wall Street projects sales of $21.5 million during the period.

The company said it expects significant growth in the number of subscribers in the second half of this year as the Christmas holidays near and more digital music players compatible with its portable subscription service come on the market.

Gorog said rival Yahoo Inc.'s launch of a steeply discounted subscription service earlier this year had so far had little impact on the company, even though Napster shares suffered initially as Wall Street investors interpreted the Yahoo venture as bad news for Napster.

"The market reaction 90 days ago … was a pretty wild overreaction," Gorog said. "Yahoo has to prove themselves in this market. They're just getting started."