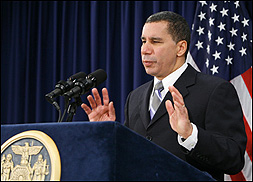 ALBANY, NY (CelebrityAccess MediaWire) — New York governor David Paterson has sent a letter to as many as 56 ticket brokers, advising them that the state has reverted to a law originally passed in the 1920s that makes it illegal to resell a ticket in New York State for more than 2 dollars above the face value printed on the ticket, the New York Daily News reported.

This law had been suspended after the state enacted a law in 2007 that temporarily lifted the ban on resale markups, opening one of the U.S.'s top ticket markets up to the secondary ticket market trade. The temporary law however, expired earlier this month and has yet to be renewed.

The 2007 law did not quite allow for unfettered ticket sales and restricted the resale price of a ticket to a markup of 45% for arenas and stadiums and 20% for smaller venues with a capacity of less than 6,000. These restrictions on markups however, were widely ignored since the passing of the 2007 bill. Renewal of the 2007 law has been held up in the legislature over several issues, most importantly paperless ticketing systems such as the one championed by Live Nation Entertainment's Ticketmaster. Ticketmaster maintains that paperless tickets, which would require ticketholders to present a valid ID at the box office in order to attend an event, would cut down on scalping. Paterson is advocating for consumers to have the ability to opt-out of the paperless system and request paper tickets.

While most observers expect that New York State will eventually move to re-allow some form of ticket resale for profit, the law in its current form may have far reaching effects that go beyond the secondary ticket market. Primary market ticket services companies such as Ticketmaster, the dominant player in the industry, often tack on service fees which can add as much as $15 to the price of a ticket, a practice that might put them in conflict with New York's new (old) laws.

Live Nation has already shuttered New York operations for TicketsNow, its secondary ticket marketplace website but other competitors such as reseller StubHub, have refused to cease operations. – CelebrityAccess Staff Writers