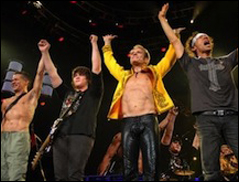 
In comments picked up by multiple media outlets, Roth said on the Sirius Opie & Anthony radio show yesterday that Van Halen were “going to be playing Europe – probably 50 or 60 shows starting at the end of this year.”


Azoff disagreed. “All the announced dates, which include the date in Australia, the dates in Japan and a date in Wisconsin, are confirmed and on sale and those are real,” Azoff tells Billboard.biz. “I manage the Van Halens, and I know nothing about any European tour.”


Azoff did confirm that Roth will indeed front the band that will play the scheduled dates, which include the Stone Music Festival in Sydney, Aus. April 20; June 21 at the Tokyo Dome, and June 24 and 26 at Osaka’s City Central Gymnasium. Van Halen will also headline the final night of Rock USA festival July 20 at Ford Festival Park in Oshkosh, Wis.


Van Halen played 46 shows last year and grossed $54 million, with attendance of 522,296, according to Billboard Boxscore, eighth among all touring acts for the year.