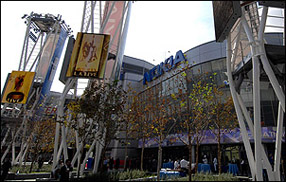 A new era for live entertainment was "officially" launched today when a bright red ribbon was cut outside the main entrance of Nokia Theatre L.A. LIVE by Los Angeles Mayor Antonio Villaraigosa and Timothy J. Leiweke, President & CEO AEG, developers and operators of the world-class 7,100-seat theatre. The ceremony took place in Nokia Plaza one day before the venues grand opening concert starring the Eagles and Dixie Chicks presented by Wachovia.

"Nokia Theatre L.A. LIVE will be the finest, most acoustically perfect and most artist and fan-friendly venue of its size anywhere in our industry," said Leiweke. "In the entertainment and live performance capital of the world, we need to have a venue that will become the showplace for every major award show as well as the most popular artists appearing today. We spared no expense to create the right atmosphere that will truly be a showcase for the performers and for Los Angeles."

"Thanks to AEG, Downtown LA will now be at center stage, with this soon-to-be bustling entertainment district," said Mayor Villaraigosa. "Without a doubt, Nokia Theatre, L.A. LIVE is the cherry on top of the major successes we're witnessing in Downtown. As we speak, flocks of construction cranes are busy building the LA of the future. Tourism and convention business in LA are booming. Nokia Theatre L.A. LIVE will increase this momentum exponentially, and keep our City running full steam ahead.

"Today, what was once just a vision is coming to life," said Councilwoman Jan Perry. "AEG's Nokia theater lives up to the promise of LA Live. It has created more jobs for people who want to work, represents another great entertainment option here in our city, and reflects the great potential of what is to come here in downtown."

Built at a cost of $120 million, Nokia Theatre L.A. LIVE, is the first venue to open within the four million square foot, $2.5 billion L.A. LIVE located across the street from the AEG owned and operated STAPLES Center and adjacent to the Los Angeles Convention Center. With a stage measuring 180' x 80', the largest in southern California, and a performance area of over 14,000 square feet, the theatre can also boast about the most impressive site lines of any theatre of its size.

With acoustics being among the most important elements of the theatre's design, General Manager Lee Zeidman commented, "We made a tremendous, multi-million dollar investment in acoustical systems, treatments and enhancements. Having spoken with industry experts as well as artists and designers, we were able to take advantage of a tremendous amount of experience and knowledge in fitting out Nokia Theatre to create what we believe will be the most acoustically advanced venue of its kind."

Naming rights partner for both Nokia Theatre L.A. LIVE in addition to the adjacent one-acre outdoor Nokia Plaza, clearly emphasizes Nokia's commitment not only to the consumer but to the presentation of music and live presentation as well as to the City of Los Angeles.

"A little over three years ago, Nokia announced its commitment to be part of the renaissance of downtown Los Angeles. Today – the vision has become reality, and we couldn't be more proud to see our name on top of this wonderful facility, Nokia Theatre L.A. LIVE," said Coffey. "Today, as the world's leading maker of digital music players, Nokia is making it possible for people to keep the music that means so much to them close at hand. And with the Nokia Theatre LA Live, we are making it possible for people to connect with that music – live, and in person."

On the eve of Nokia Theatre L.A. Live's grand opening concert starring the Eagles and Dixie Chicks presented by Wachovia, the first of six concerts starring the legendary groups, the theatre has already lined up an impressive schedule of the most popular and talented performers including Neil Young, Bjork, Queens of the Stone Age, Enrique Iglesias, Aretha Franklin, Sugarland, John Fogerty, Mari J. Blige and a New Year's Eve celebration starring George Lopez. Special events like the American Music Awards, So You Think You Can Dance, La Quinta Estacion and Video Games Live will also appear along with comedy stars Russell Peters and Larry The Cable Guy.

"When you marry one of the greatest venues for live entertainment, with outstanding site lines, state-of-the-art acoustics and tremendous guest amenities with great talent, it is a foregone conclusion you will have instant success, said Randy Phillips, President and CEO AEG LIVE. "Nokia Theatre L.A. LIVE is truly a win-win for both performer and their audience."

In addition to Nokia's investment in Los Angeles, the Finland-based organization that has sold 200 million music devices and 170 million megapixel camera devices, making it the world's largest manufacturer of digital music players and cameras, has additionally partnered with AEG on venues such as Nokia Theatre Time Square and Nokia Theatre at Grand Prairie.

"For Nokia, this theatre, along with our other Nokia Theatres, is the perfect way for us to connect to consumers through something that has virtually universal appeal – music. Because no matter what type of music is special to one person, Nokia is able to reach him or her through our theatres," commented Jo Harlow, Senior Vice President, Marketing, Nokia. "There is something big happening here in downtown LA, and Nokia is a part of it. Besides the Nokia Theatre LA Live, there is the Nokia Plaza, an area for outdoor entertainment and Club Nokia, a smaller, more intimate club-like setting for live music."

"Ultimately, Nokia Theatre L.A. LIVE will exist as a component of a vibrant, energized, cutting-edge entertainment "campus" second-to-none as a destination for all types of production, live entertainment, performances and celebrations," added Leiweke. "No other City can do this like Los Angeles. We create more in music, television and film than any other city and we need to celebrate this achievement." – CelebrityAccess Staff Writers