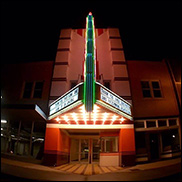 OKLAHOMA CITY – Oklahoma City's historic Tower Theatre re-opened as a concert venue after being shuttered for almost 3 decades with a concert by local rapper Jabee.

The art-deco theater was purchased in 2006 by Marty and Mike Dillon who began renovations but languished until 2014 when Oklahoma City development group Pivot Project, comprised of David Wanzer, Ben Sellers, and Jonathon Dodson stepped in two years ago to see the venue's $6.5 million revamp brought to fruition.

Originally opened in 1931 as a movie theater, the Tower is one of Oklahoma City’s last movie houses with an intact auditorium and neon marquee and the developers tried to keep the art-deco feel of the building's original architecture.

“They came back in and inlaid original floor to match the time period, that Art Deco feel,” facility operator Scott Marsh of Levelland Productions told Oklahoma's News Nine. “They had a custom fixture put in to match that. The ceiling on the theater itself is stair-stepped and is back to its original glory; things that we put in like a special velour curtain both for aesthetics and sound.”

Levelland Productions told NBC affiliate KFOR that Levelland Productions plans to stage a variety of live music, as well as movies and plays with special removable seating. Upcoming shows on the calendar include Horse Thief with Special Thumbs on March 3rd. – Staff Writers