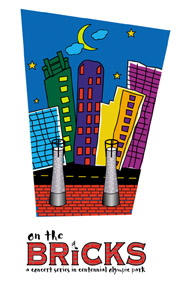 On The Bricks, the free concert series, will return for its second year at Atlanta's Centennial Olympic Park May 24-Aug. 16 with Friday July 5 off. During its inaugural 12-week run this year, the event attracted more than 500,000 people and 41 bands. On The Bricks 2002 will be hosted by WSTR-Star 94!

"We are thrilled to announce our return to Centennial Olympic Park as well as our partnership with Star 94!" said Mad Booking President and On The Bricks promoter, Marcie Allen. "We had a phenomenal success last year and we wanted to expand the event and feel that Star 94 is the station!"

"We at Star 94 consider this to be one of the premier music events in Atlanta!" added Dan Bowen, program director of the radio station. "We're so excited about our involvement and look forward to making On The Bricks a huge success as well as one of our signature events for years to come."