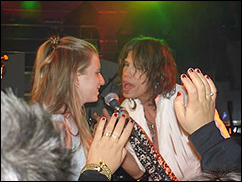 NEW YORK (CelebrityAccess MediaWire) — David Brooks, the CEO/chairman of DHB Industries, a contractor which supplies body armor to the U.S. military, has has been in court facing charges of engineering a $190 million dollar stock fraud scheme, insider trading, and financing a lavish lifestyle with corporate money.

Among the list of extravagances detailed in court proceedings which Mr. Brooks allegedly misused corporate funds to pay for, was a $10 million bat mitzvah for his 13-year-old daughter Elizabeth. Held at the posh Rainbow Room in Manhattan, guests at the party were entertained by an all-star lineup with performances by rapper 50 Cent, Aerosmith, Tom Petty, Kenny G, The Eagles's Don Henley and Joe Walsh and Stevie Nicks.

According to the New York Daily News, Aerosmith was flown in by Brook's corporate jet and reportedly cleared $1 million for their the 45 minute appearance while 50 Cent pocketed $500,000 for four or five songs. Brooks was reportedly so enthused about Aerosmith's performance that he changed into a hot pink suede biker suit, studded with chains and joined the band on stage.

Brooks is currently a guest of the federal government, after having his bail revoked when investigators discovered that he had allegedly hidden millions overseas. – CelebrityAccess Staff Writers