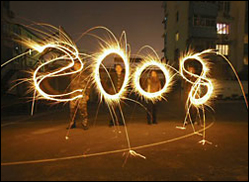 year, a total of 15%. But if you think sales are dropping

across the board, on a strict percentage basis, you’re wrong.

The best sellers are taking a disproportionate hit. In other

Sales in 2007, including both physical and digital, topped out

million units were sold. So, you’d expect sales of best

sellers to drop by approximately one third, or 36.25%, to be exact.

The best selling albums of 2000 were:

The best selling albums of 2007 were:

So, the drop from number one over the past seven years was a

outpacing the decline of the industry SIGNIFICANTLY!

The major label scorched earth policy of overexposing an album

to ubiquity seems to be less effective than EVER!

It’s not like Josh Groban didn’t get TV exposure. Hell, he was

featured on Oprah. But it was not like ‘N Sync being all over

MTV, back when the "M" stood for music and the outlet banged

videos AND PEOPLE WATCHED THEM!

Eminem was a cultural phenomenon. But today you’re famous for

your antics, not your music. And your antics don’t sell

records. Just ask Paris, Lindsay or even Britney. TMZ and

PerezHilton will reach a lot of people, but they’re not about

rock is dead… Well, meat and potatoes rock is alive and

kicking. But Daughtry is no Creed, able to sell out large

venues from coast to coast.

boy band genre is kaput. But is this steep sales decline

amongst best sellers about the lack of fads, or of stars, or

just an indication that society has changed, that in the Net

era, everything is niche. You’re lucky to gain a foothold.

Hold on to your fan base, maximize the revenue there, because

You’ve got hundreds of TV channels. Endless movies in the

theatres and on NetFlix. The infinite Web and hand-held mobile

percentage of the public can be IGNORANT OF YOUR PRODUCT!

don’t all want the same thing.

This is bad news for the major labels. Starting in the

seventies, with the Eagles, Fleetwood Mac, and Boston, the

labels counted on the breakout superstar to make their

numbers, to pay for all the failures. Well now that paradigm

is done. You just can’t sell that many of ANYTHING! Albums

have to pull their own weight. Saturation marketing moves very

little. You’ve got to find something that resonates with a

portion of the public and then hope people spread the word.

Piracy is hurting the record business. But that’s not the only

thorn in the side of the major label. It’s not 2000 anymore.

We don’t live in one homogenous society, everybody paying

attention to the same thing. We live in an era of endless

narrowcasting. Although the majors still believe we live in an

era of broadcasting. And that’s hurting them.

swinging for the fences, there’s still a market out there for

you. Don’t overspend, know it takes time for people to catch

on to you. And know that being as big as the Beatles, even the

Backstreet Boys, is presently an impossibility.

All the structures built upon superstardom… The majors,

LiveNation… They’re in trouble. Their only hope is to go

niche, to try and find quality that resonates and build slowly

for the long term. But they don’t want to do this. Because

it’s too hard to earn money this way. Leaving the field wide

The old game is done. Superstardom is within almost no one’s

grasp. Be happy that ANYBODY cares about your music!