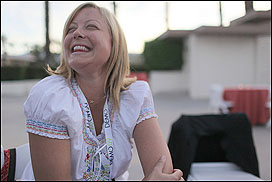 Buzz starts at the bottom.

I hate press releases. Almost as much as I hate the people who e-mail me their MP3s unsolicited and ask for a ride to stardom (as if I could provide one!)

I spend all day at the computer. Surfing regular sites that might amaze you. But I've ferreted out the information I desire. And I have trusted sources. And when it comes to music, it's not newspapers. Not Pitchfork or the other blogs either. It's individuals.

Someone who's hyping a record because he doesn't have to. Who is truly enthused. I'll check out that person's recommendation. Once. But, if it's good, this person becomes part of my network, a trusted source. The question is, how can you reach these people? Who oftentimes are not professionals, but are tastemakers nonetheless.

There's a fascinating story in Sunday's "New York Times" about tech PR. Most fascinating because the star subject, one Brooke Hammerling, has revealed herself to be a wannabe equivalent to those angling for press on PerezHilton.com. Rule one of reality, never appear on reality TV! You're gonna look bad. Even if you're nice. Because nice doesn't play well on TV. Rule one of public relations, don't have your story told by the media! Let me be clear here. If you need the media to boost your appeal, go for it, cope with the carnage. But if you're already making a living, don't you know media hype is going to kill you? I know Brooke Hammerling, not personally, but the good-looking girl who flirts and climbs on her good looks…every guy knows her. Oh, don't cry sexism. Women in business can triumph without trading on their sexuality. But a Google pic search will show you that Brooke Hammerling is much better looking than the average bear, and all those men fawning over her…that's an age old game.

But that does not mean there are not nuggets of truth in this article.

I know no one like Brooke and her colleagues in the music business. Someone who starts with relationships and leaves press releases on the cutting room floor, who doesn't even bother to compose mass mail. Someone who knows it's not about the story, but the result! How can you build something long term? By getting those who pay for music to talk about it, not those who get it for free.

It's kind of like those concert reviews in the paper. Why do these writers even bother going? If you're not a fan, why do I care what you think? Tell me what someone who loves the band thinks. Same deal with recorded music. I don't want the musings of someone who got to have lunch with the star or is playing a game of endless favors with the flack, but someone who's so enthused about the music that he can't help but tweet about it!

We're all sophisticated now, we know how the machine works. We know those talking heads don't give a shit about Michael Jackson, they've just got to fill airtime, giving us what they think we want. If we want a take on MJ's funeral, we'll ask the public. Via Twitter, via online search, via blogs. There you get unfettered truth, not the canned words of someone who's worried about advertisers and keeping their job.

"The New York Times"? When was the last time the "Times" broke a band? This article includes examples where users picked up the story first and then the mainstream media got it from them. Then you no longer have a manufactured story, but a real one. The paper is reporting on the buzz, not trying to create it.

We've got police all over the Web ferreting out street teamers, telling the trolls to go away. We're immune to the hype. But we respect truth. And truth comes from the bottom, those with no investment other than their time, which is precious.

Once the mainstream writes about a trend, it's frequently over. And mainstream press tends to kill that which is not already dead. Your goal should be to keep the mainstream away from your story, or if it's so big they want to write about it grant no access! Say no to Letterman. Say no to the newspaper. This is how Trent Reznor built cred, which he's still sailing on two decades hence.

The past has been about shilling indiscriminate product to a public sans knowledge. Now people know whether the new album by a star is any good before the official release date. They're buzzing about new bands almost instantly. You've got to start off with something good. Stop trying to sell crap. It's not worth it. And if you've got something good, don't worry about making a big splash, about the rate of acceleration, just be concerned with whether fans are picking up on it. The fans determine whether you're going to have ultimate success. You don't get paid on media impressions, you get paid on sales. Satiate the public. Give people access.

And be sure to check out this referenced site too: proprtips.com