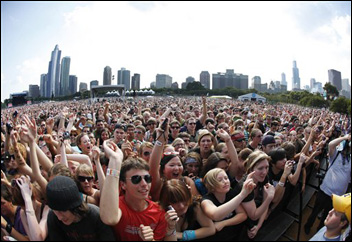 "’The goal in life,’ Mr. Walker said, ‘is to work for yourself, and with your friends.’"

Lollapalooza and Its Promoters Rise on the Stage of Chicago

Come on, the business was built by entrepreneurs. Everyone from Ahmet Ertegun to Brian Epstein to Robert Stigwood. Forces of nature, these were go-getters with no backing, who needed to make it purely on their wiles.

David Geffen and Irving Azoff were no different.

But then all the labels were bought by corporations, after the Fortune 500 realized how much money there was in music. One can argue that the music died in the early seventies, when Elektra and Atlantic and Asylum were fully integrated into Warner.

Or, one can go later, to when Island and A&M were bought out by PolyGram, and Alain Levy ignored Chris Blackwell and Jerry Moss. Chris Blackwell? He started off selling singles from the back of his motorbike. Not only did he sign Traffic and so many other English acts, he made Bob Marley mainstream, by backing him up with rock players. Blackwell wasn’t just a businessman, he was a creator, with only his own bank account to fall back upon. Ditto with Jerry Moss. And isn’t it interesting that Jerry is successful in another field, horse racing:


The last great hope of individual entrepreneurship in the music business occurred with rap. Russell Simmons did it his way. Because the corporate behemoths were not only not interested in his way, they weren’t even interested in the music, they certainly didn’t get the culture, they just wanted good-looking automatons who could be featured in expensive videos on MTV.

At first MTV was a renegade operation. Remember "I Want My MTV!"? Who’d rally around the outlet today? But when advertisers said viewers were flipping the channels too much, MTV went to long-form programming, and music became at most the sauce, no longer the steak.

And isn’t it funny that what we’re constantly hearing the whiners complain about is they just can’t get in, they just can’t get the corporations interested. The labels who break the acts, the corporations who sponsor… Don’t they get that this is death? That those companies are run by egomaniacal bean counters who don’t give a shit about you and only care about their paycheck?

The Net fosters entrepreneurship. But it’s a renegade society, every man for himself, and people don’t like this, they’d rather bow to the old guard than roll up their sleeves and do it themselves. The new acts say GIVE ME MONEY! I say STARVE, figure it out for yourself and keep all the revenue. Only tie up with an equal, someone else working from his own capital, who needs success.

Read about the three Charlies who run C3. If you don’t want to run away and work for their circus, I don’t know why you’re reading this. They’re hands-on, they’re using the walkie-talkies, they’re building the infrastructure and their reputation. They’re taking risks…first and foremost, for the joy.

But they testify about Seth Hurwitz’s shed. And although irascible, Jerry Mickelson has huge fans of his and Arny’s JAM.

There was a music business before the Beatles, but the Liverpool foursome wiped the old slate clean. Suddenly, there were all new players, making it up as they went, with acts giving the middle finger to mainstream society – the oldsters telling them how to behave. Now, the acts just want to know where they can sell out. Hell, we know reality TV isn’t real, that Snooki and the Situation act for the camera. Music used to be real. How real is Lady GaGa? When it’s truly real, you can shut your eyes and the music is enough. Can’t GaGa go on the road without the trappings?

But I’m not here to castigate GaGa. I’m just saying the old system is broken. Because it’s run by corporations. Music is the one thing you don’t need a degree to do. And you don’t need much money. You can do it on your own. And that’s what people are now doing. That’s why we’re experiencing a revolution.