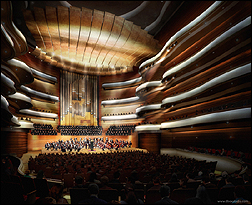 The Orange County Performing Arts Center broke ground recently for its first new major expansion project since opening in 1986. The new structure, designed by internationally renowned architect Cesar Pelli, will be adjacent to the existing center and include the 2,000-seat Renee and Henry Segerstrom Concert Hall and the 500-seat multi-purpose Samueli Theater. Financed entirely through private funds, it will cost $200 million and will open in the fall of 2006. Henry Segerstrom donated $40 million of the cost in August of 2000. This remains the single largest charitable gift in the history of Orange County. In early 2001, the Samueli Foundation donated $10 million to the expansion efforts.

The front of the new concert hall will be a glass facade, or "curtain," that curves across the entire breadth of the hall. From outside the theater, patrons will have spectacular views into the multi-level atrium lobby that will showcase, a spiral staircase of silver and glass, a chandelier of 300 points of light and a silver leaf ceiling in which fiber optics will add texture and illumination. The new concert hall will feature a custom-designed concert organ, dedicated chorus seating, box seating, silver-leafed adjustable acoustical canopies, adjustable reverberation chambers and a solo piano lift and orchestra pit capabilities.

The Samueli Theater has been designed to accommodate a number of uses and configurations, including traditional theater-style seating, theater- in-the-round, or club-style with cocktail tables for intimate seating clusters. The theater will be technically flexible to support recitals, musical theater, corporate meetings and banquet functions.