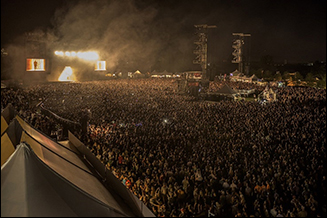 OTTAWA (CelebrityAccess) — A roster of performers ranging from Air Supply and A$AP Ferg to “Weird Al” and Kanye West entertained the more than 300,000 music fans that turned out for the 2015 Ottawa Bluesfest, which wrapped up on Sunday.

“It’s been more than 20 years since we launched the ‘fest, and people seem to be enjoying what we’ve been bringing in for them, especially the broader appeal—it’s been an evolution,” says the festival’s executive/programming director Mark Monahan. “It used to be, ‘why are you bringing in EDM or rap, or why country or world music?’ Well, it turns out that a lot of people like a lot of different kinds of music; especially in Ottawa where music fans are very savvy.”

Kanye West, who had been the controversial choice as a headliner for the festival, proved to be a big draw, with the Ottawa Citizen reporting that West performed in front of a crowd of more than 30,000, the largest since KISS performed at the fest.

Keith Urban also proved to be a big draw at the 2015 edition of Bluesfest, who, along with performers such as Jason Aldean and Johnny Reed, flew the country music flag at the festival.

Another change at the festival this year is was the increasing presence of a younger crowd, with festival director Mark Monahan telling the Ottawa Citizen that more youth passes were sold to the festival in 2015 than in previous years.