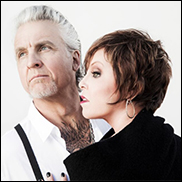 
Pat Benatar remains a fearless leader for female singers from all genres. With musical partner, guitarist, and husband Neil Giraldo, celebrated the 35th anniversary of her debut album In the Heat of the Night with an extensive tour reaching well into 2015. A two-CD + DVD live recording of their 35th Anniversary tour was released April 2015. Hits like “Heartbreaker,” "Hit Me With Your Best Shot" and "Love Is A Battlefield" made them MTV stars in the 1980s, and Benatar and Giraldo have sold over 26 million albums with 19 Top 40 hits.


Clint Black, singer-songwriter/producer/multi-instrumentalist/actor is celebrating the 25th anniversary of his first platinum album by releasing his first studio album in a decade. On Purpose will be released September 25th via Thirty Tigers. Black’s debut album Killin’ Time garnered the country music icon five ACM awards including Album of the Year, Top Male Vocalist, and Single of the Year for “A Better Man.” Black won a Grammy Award in 1999 as well as the CMA’s Horizon Award and Male Vocalist of the Year in 1990. He also has his own star on the Hollywood Walk of Fame. To date, he had sold over 20 million albums, charted two dozen #1 singles and 30 Top 10 hits – all written by Black.


Country Concert at Hickory Hill Lakes in Fort Loramie, Ohio has been a family affair from its beginning over three decades ago. Over 300 country acts have played this beloved festival in its 35-year history. What began as a seasonal family campground, the Barhorst family has turned their 500-acre property into a premier festival site for one of the largest family-owned and operated events in the United States. 2015 headliners Carrie Underwood, Florida Georgia Line, Jake Owen, The Band Perry – plus 20 more acts – drew over 60,000 fans for this year’s the 3-day event.

IEBA will host its 45th Annual Conference October 10-13, 2015 at the Omni Nashville and Country Music Hall of Fame® and Museum. Registration is open. For more information, please visit ieba.org or call 615-679-9601. IEBA’s Honors and Awards Ceremony will be held on Tuesday, October 13 at 8pm at the CMA Theater at the Country Music Hall of Fame® and Museum. This is a free private event for Conference Attendees only.