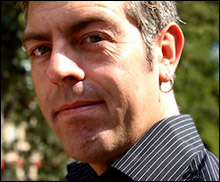 BERLIN, Germany (VIP-NEWS) — In setting their sights on the opening of the new music hall at the Mercedes Platz next year Anschutz Entertainment Group (AEG) expands its booking team for the Mercedes-Benz Arena in Berlin:

As of September 1st Paul Cheetham (49) joins AEG as Director Booking for the music hall. At the same time Aissata Hartmann-Sylla, long-time booker of the Mercedes-Benz Arena is promoted to Senior Director and will now oversee the event acquisition for both the arena and the music hall.

Before joining AEG, Paul Cheetham was Managing Director for Heartburst Management where he was involved in staging B2B events such as Popkomm, Berlin Music Week or most recently Germany`s leading music industry event, Reeperbahn Festival in Hamburg.

The Sheffield (England) native has been working in the music- and entertainment industry for over 20 years among others for the London based promoter Mean Fiddler and Live Nation Scandinavia in Finland.

Aissata Hartmann-Sylla has been with AEG in Berlin since 2009, starting as event manager and since 2013 overseeing event booking for the now called Mercedes-Benz Arena.

The music hall with a capacity of around 4.500 is being constructed as part of Mercedes Platz, an entertainment destination currently developed by AEG in front of Mercedes-Benz Arena in Berlin. Mercedes Platz will also feature a state-of-the-art UCI movie theatre, a lifestyle bowling lounge by Bowling World, 15 cafés, restaurants and bars as well as two hotels – an Indigo Design hotel and a Hampton by Hilton hotel.