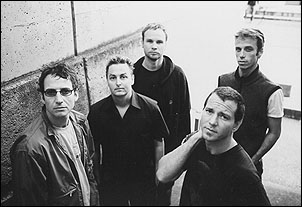 At a recent Pearl Jam concert in Denver, dozens of fans walked out after lead singer Eddie Vedder impaled a mask of President Bush on a microphone stand. Pearl Jam says they were misunderstood and haveissued the following statement:

There were close to 12,000 people at the April 1st Denver show. It's possible two dozen left during encore but it was not noticeable amongst the 11,976 who were loudly applauding and enjoying the evening's music. It just made a better headline to report otherwise. [You'll note the writer doesn't mention this in his review of the show from the day prior. See "Pearl Jam Show Will Make a Great CD" by Mark Brown, Rocky Mountain News. And it is little more than a mention in any of the show reviews.]

"Dissension is nothing we shy away from — it should just be reported about more accurately. Ed's talk from the stage centered on the importance of freedom of speech and the importance of supporting our soldiers as well as an expression of sadness over the public being made to feel as though the two sentiments can't occur simultaneously."