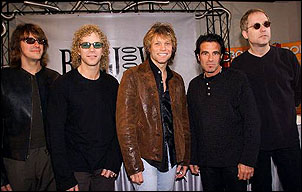 Bon Jovi will make an unprecedented live appearance on QVC, the world's leading electronic retailer, on April 12 (8:00-9:00 p.m. ET) from its sold-out Bounce Tour concert in San Jose, CA. Additionally, QVC will make available a Bon Jovi Limited Tour Edition Bounce CD &DVD/VHS Package (Item #E17800) featuring previously unreleased performance footage, which will be available only on QVC (www.qvc.com). This unique event will be Bon Jovi's first and only live televised performance from its Bounce Tour. Segments of the band's live performance will be broadcast nationally on QVC between 11:30 p.m.-midnight and 12:30-1:00 a.m. ET.

During the eight o'clock hour, the band members will give viewers a backstage glimpse into their soundcheck before the concert, talk to QVC program host Lisa Robertson about their music, and also take phone calls from fans live on the air.

"We are really excited about working with QVC on this initiative," said Jon Bon Jovi. "This alliance allows us to reach out to our fans across the country and offer them another way to experience a Bon Jovi live show, as well as a chance to own some never-before-released video, and get an inside glimpse into the inner workings of the Bounce tour."

"QVC is always looking for new and interesting product for our diverse audience, and no one has a more diverse audience than Bon Jovi," said John Kelly, QVC's VP of Merchandising Home. "After selling more than 98 million albums, and performing over 2000 shows for more than 31 million people, Bon Jovi is the perfect fit for us. We are really looking forward to working with one of the world's most successful rock bands for this innovative Bon Jovi/QVC event."