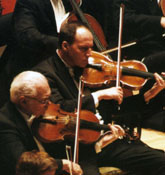 PHILADELPHIA (AP) — The Philadelphia Orchestra is moving ahead with this week's concert schedule despite the passing of a deadline to settle an ongoing labor dispute.

Negotiations were expected to resume Monday.

"There was a lot of give and take on both sides," said Tom McNally, a spokesman for the city Commerce Department. "Both sides agreeing to stop the clock is definitely a positive."

Mayor John Street continued to assist in contract talks, but a midnight Sunday deadline passed without an agreement. It was unclear whether the members were still working under terms of the old contract.

Management spokeswoman Katherine Blodgett said she did not have any information on the situation. The original contract expired Sept. 19. McNally, however, said a "solution" is expected early in the week.

Representatives of the orchestra's 109 unionized members walked out of talks in September, balking at management's position on salaries, pension cuts and a possible reduction in the orchestra's size.

In 1996, Philadelphia Orchestra members struck for nine weeks before the two sides reached an accord. Officials have said the most recent talks would set the tone for pending orchestra negotiations in other large U.S. cities.

The union members, who belong to Local 77 of the American Federation of Musicians, include 106 musicians and three librarians. The musicians' current minimum salary is about $105,000, although principal players and some other members earn substantially more.