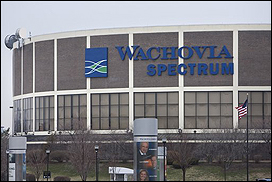 
It is unclear how or if the Wachovia will fit into this plan. While it may be possible for the Wachovia to fit in with the proposed development, its age may lead to it being demolished to make way for the new complex.


"This will be the ultimate entertainment experience I've always envisioned for the complex," Ed Snider, chairman of Wachovia owners Comcast-Spectacor told the Bulletin.


To accomplish this goal, Comcast-Spectacor has retained the services of Cordish Company, a Baltimore-based developer who has worked on similar projects around the country.


"The Cordish Company has an outstanding reputation for creating some of the most popular entertainment districts in the US," said Comcast-Spectacor President Peter Luukko. "Philadelphia residents are already familiar with South Philadelphia as the destination for sports and entertainment and through this new partnership we intend to create the ultimate entertainment experience this City so vibrantly needs."


To date, no final cost estimate for the project has been given, nor has a proposed date for groundbreaking or the date when PhillyLive! would actually go live been made public. – CelebrityAccess Staff Writers